The Cruisers 400 Express (introduced in 2003 as the 3970 Express and called the 420 Express in 2006–10) is a sleek and stylish express cruiser that combines a spacious cabin layout with a comfortable cockpit and excellent performance. Cruisers offered two different layouts—the standard plan has an aft settee/ lounge open to the salon, while the optional layout encloses this area behind a bulkhead and door. Both floorplans feature a private stateroom forward with island berth and two full heads.  Our Customers had a 2006 420 model and were tired of fighting their mattress by trying to put standard bed sheets on their mattress and needed a custom quilted coverlet and shams to make the stateroom look ship shape during the day.  They opted for our solid navy 600 thread count sheets and for the coverlet and shams they chose Coral Craze.  An interesting thing about Coral Craze is that it’s a jacquard weave, so the reverse of this fabric is navy with white sea fans.  It’s done on special request and looks fantastic.  This Cruisers 420 Express is one of over 700 different boats that we have patterned and keep on file.  Let’s make your stateroom a STATEMENT Room! 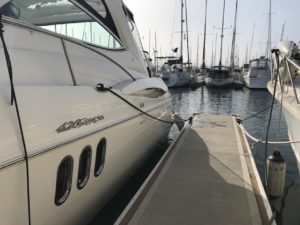 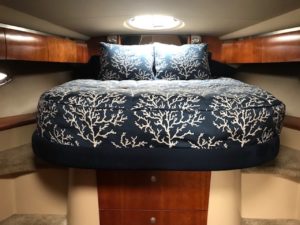 Not located in California or Florida? No problem! Just give us a call & we can give a phone consultation to help you pick the best products to suit your needs.